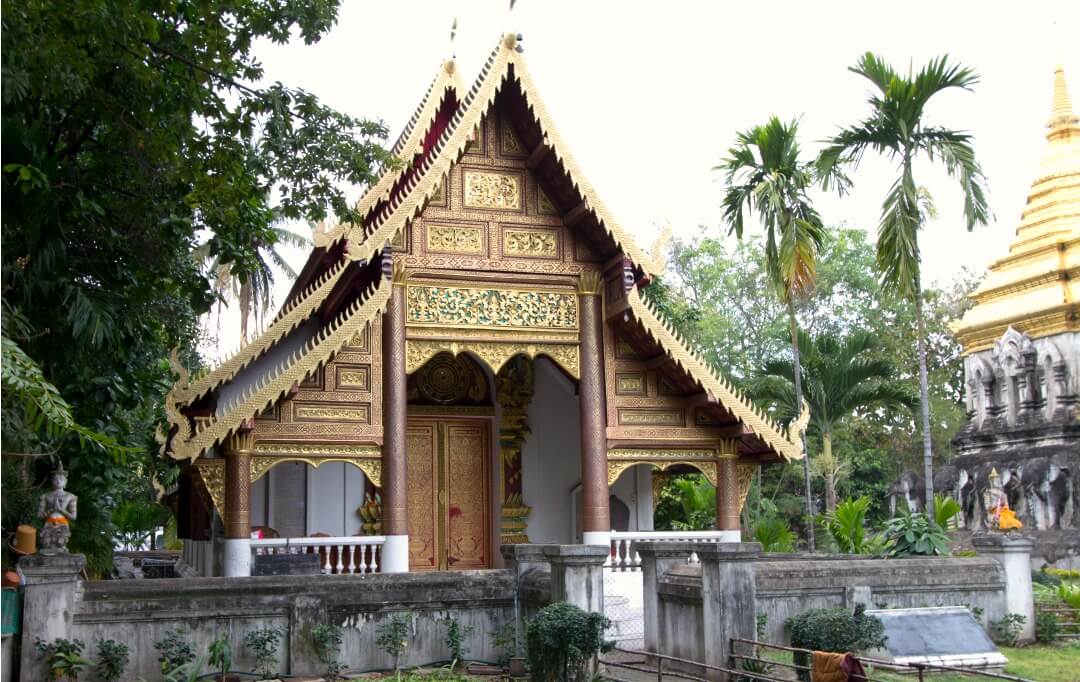 Posted at 01:39h in Blog by thailandtravelbag 0 Comments
Share

Chiang Mai is Thailand’s second major city and the capital of the north. It is located in the Himalayan foothills and used to be the capital of the Independent Kingdom of Lanna (1296–1768). It’s is a wonderful city to visit, perhaps making the top 20 cities in the world in our opinion. There are over 300 temples in the Chiang Mai area dating back to 1296 when the city was founded. Here is a list of our top picks for Chiang Mai temples in and near to the Old City.

This mountaintop temple is a must see if you visit Chiang Mai. You can travel to, and explore this temple in about two-four hours since it is only 13km outside the city. The climb up to the temple is a little tough because the staircase is steep, but you don’t need to be super fit to make it up.Doi Suthep was founded in the 14th century and today is the most important temple for Theravada Buddhists in the north of Thailand. It is a journey every Thai Buddhist is recommended to make at least once in their life so it is not just a temple but a pilgrimage too.

The temple is beautiful with many stunning statues, sections and courtyards. There are many representations of the Buddha, ornate dragon statues, and also lots of relics. The views are also spectacular.

This temple was built around 1383. King Keuna of Chiang Mai selected a white elephant to carry a holy relic of the Lord Buddha to what would be its resting place. The elephant wandered up Mount Suthep until it came to a place where it finally laid down. A Temple was built on the spot to house the holy relic, and both remain there to this day.

Wat Chedi Luang is particularly beautiful and also imposing. The structure was damaged during an earthquake in 1545, but it remains mainly intact. The massive elephant carvings are a wonderful photo opportunity and is one of the most photographed aspects of all the Chiang Mai temples. The temple is particularly lovely at night when it is lit up. There is an ancient tree planted next to the city pillar, meant to protect the city and its grounds. This tree is huge and because of its sacred purpose, will not be cut down.

This temple is located right in the centre of the Old City and it is the largest temple within the old city walls. It was constructed in 1345 when a Lanna king built it in his father’s honour. The temple’s most sacred relic is the very old and famous, (now headless) Buddha called Phra Singh Buddha. According to legend, the Buddha came to Thailand from Ceylon to Ayutthaya and then to Chiang Rai, Luang Prabang and back once more to Ayutthaya. It arrived in Chiang Mai in 1767 where it has been ever since.

A historic scripture repository is also located at this temple. Repositories were designed to protect the delicate paper sheets used by monks and scribes to keep records/document folklore. The walls of the temple are covered with murals illustrating Lanna customs, dress, and scenes from daily life.

This was the first temple to be built in Chiang Mai, so is the oldest of all the Chiang Mai temples. Wat Chiang Man was built by King Mengrai in 1296 as part of the original city construction and it it is alleged that he lived here while the city of Chiang Mai was being built.

This temple is an exceptional example of Lanna style architecture. The golden Chedi surrounded by carved elephants, which can be found at the back of the complex, is a favourite among tourists. The ornate red roofs and gold carvings on the newer temple buildings are also stunning. Two rare Buddha statues are also housed here. They are the Crystal Buddha and the Marble Buddha.

Wat Umong is a beautiful but simply designed temple, located in a forest environment. It is located 2km west of the Old City on Suthep Road, nestled into the foothills of Mount Suthep. It was built in the 14th century for a revered monk. Then abandoned for nearly six centuries. This forest temple and cave complex is very beautiful and distinct in style to other Chiang Mai temples.

A unique aspect of Wat Umong is the corridors under the temple. No one really knows why they were made. They still have visible paintings from the 14th century.  This temple is close to Wat Suan Dok and is a great chance to get out of the city into the countryside and see a temple in a lovely woodland setting.

The trees throughout the complex are decorated with hundreds of Buddhist proverbs in both English and Thai.

Wat Doi Kham is well worth a visit. This temple has a famous legend associated with Buddha and his supposed travels in the region. Legend has it that this site was established long ago by Buddha himself when he met and converted the indigenous Lua people to Buddhist practices.

There’s a 17 metre tall white Buddha statue, a beautiful gold Chedi and there are also lovely views of the valley below.

This temple, constructed in 1371 is built on what was once a 14th-century Lanna King’s gardens. Some of the temple’s Chedis contain ashes of the old Lanna Royal Family.

You can also view a Buddhist relic brought from Sukhothai in 1371, which split into two a long time ago. The other half is buried at Doi Suthep. A 500-year-old bronze Buddha image, one of the largest in northern Thailand, is also at Wat Suan Dok and is well worth visiting.

Wat Bupparam is located 500 metres outside of the Phrae Gate of the Old City. It was built in the 15th century and houses beautiful statues and ornaments including three famous Buddha images, a painted wooden Buddha, a gold leaf Buddha, and green gemstone Buddha. The gardens surrounding the main building are filled with flowers and statues, some kinda quirky – you should check it out for yourself!

The architecture of the temple is different from typical Thai temples, and there is a specific reason for this. The main temple structure was originally built in 1497, but in 1561, when this area was occupied by the Burmese, Burmese monks had the temple’s structure changed to suit their style. Normally Thai temples are a rectangular shape, while this one is crossed shape with a tower in the middle.

The 400-year-old Chedi also has a Burmese influence and is guarded by the typical Burmese golden lions.

Wat Jed Yod is situated near to the Chiang Mai National Museum on the northern loop of the ring road. Built in 1455 by King Tilokaraja, its name means “Seven Spires”.  It was modelled on the Mahabodi Temple in India, where the Buddha supposedly achieved enlightenment. The Chedi contains the ashes of King Tilokaraja who famously organised for the World Buddhist Council to come to Chiang Mai. Wat Jed Yod was built to host the Eighth World Buddhist council which was a massive honour for the Kingdom of Lanna at that time, so of all the Chiang Mai temples, if has great relevance to the history of the Buddhist religion.

The main temple of Wat Pan Tao is constructed entirely of teak panels supported by 28 massive teak pillars. It is one of the few remaining all wooden structures of its sort in Chiang Mai. It has a three-tiered roof with golden coloured roof finials, shaped as Naga snakes on its roof ends.

It was built in the late fourteenth century and its survival is a miracle. Wat Pan Tao is one of the last remaining wooden temples of that era and since it is next door to Wat Chedi Luang, it is easy to visit. The elegant wood carvings that decorate Wat Pan Tao are also beautiful.

Wat Srisuphan was built in 1502, although little remains of the original temple. The temple is now the focus of renovations that started in 2009 and are designed to make it a centrepiece for the ‘silver village’ it serves. The entire surface of the hall inside and out is covered in silver, as is the roof, and all sorts of ornate silver statues, signposts and ornaments are being added. This is a modern masterpiece and worth a visit for sure. It is great to see a Thai temple decorated in silver rather than gold. The monks at this temple are particularly tourist friendly, always ready for a chat.

Architecturally, this not a spectacular temple, but setting wise is amazing. There is a waterfall running through the temple grounds and a stunning view out over Chiang Mai.  It’s on Doi Suthep mountain and it was used by pilgrims heading to Wat Phra That Doi Suthep as a resting spot when there was no road and no cars.

Wat Pha Lat is a complex of small temples and beautiful stone statues that focus around the waterfall. The temple area is incredibly peaceful, blended into nature in a wonderful way.  There are no shops, no crowds, just the peace of a temple, stunning views and a waterfall. Given its setting and the peaceful nature of Wat Pha Lat, as a tourist, you will have the most authentic Buddhist experience here of all the Chiang Mai temples.

The walk up the hill to Wat Pha Lat takes 35-50 minutes from Suthep Road, and you should probably wear trainers to do it. Orange robes wrapped around the trees to mark the path up the hill to the temple. Wat Pha Lat means ‘Monastery at the Sloping Rock’.