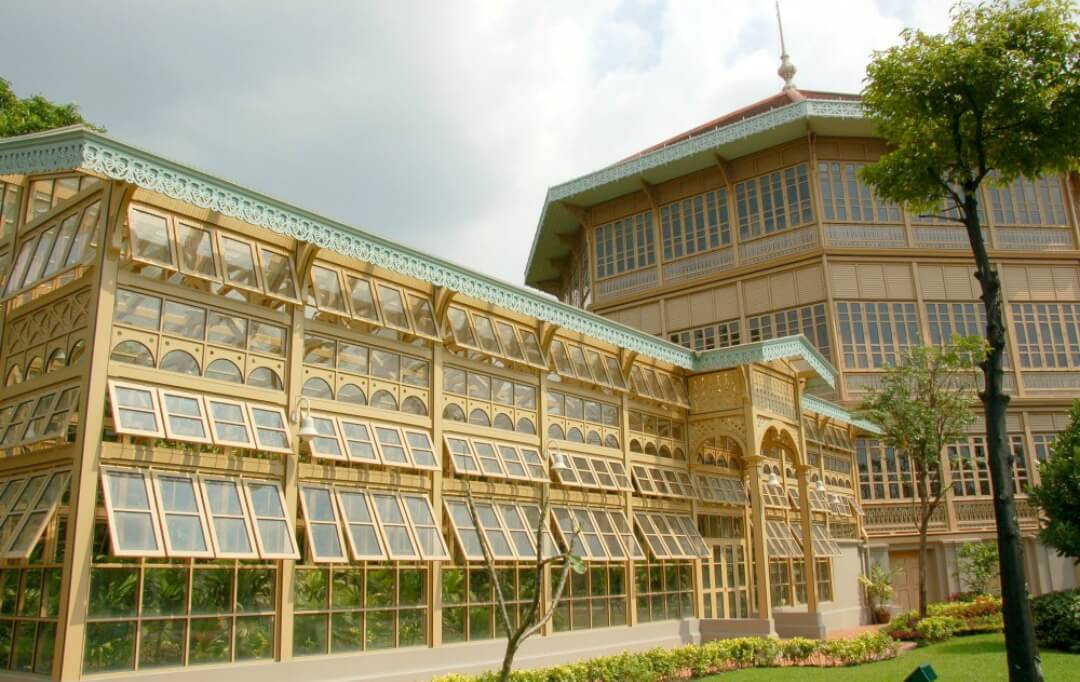 Posted at 20:42h in Bangkok, Blog by thailandtravelbag 0 Comments
Share

Dusit Palace is the political centre of Thailand in the 21st Century and was built in the early 1900s by King Rama V. It is a leafy area with a complex of palaces and royal residences which were created to help the King escape the heat and overcrowding of the Grand Palace. Rama V was the first Thai King to ever visit Europe and the Palaces he saw with their long wide boulevards and spacious gardens inspired him to build Dusit Palace.

Dusit Palace is 16 acres of gardens filled with dozens of buildings most of which have been turned into museums celebrating Thai heritage. Of these buildings, there are 3 that stand out architecturally and are great examples of how Thailand took European architectural trends and gave them a unique Thai flavour.

The centerpiece of Dusit Palace is an impressive two-storey white marble palace called Ananta Samakhom Throne Hall which was built between 1906 and 1915. It sits at the end of a leafy boulevard, is made from Italian marble and was built in the European neo-classical-style. The Throne Hall has a large dome in the centre under which the Royal Throne sits. Lining the walls of all the domes are frescoes depicting Chakri Dynasty monarchs.

The Ananta Samakhom Throne Hall was used as the headquarters of the People’s Party during the the 1932 Revolution which turned the country from an absolute monarchy to a constitutional monarchy. The first National People’s Assembly convened here in 1932 and then it was used as the Parliament House until 1974.

Today the building is used to court visiting dignitaries, hold state meetings and host royal occasions and it  is also open to the public as a museum. It currently it houses arts and crafts made with traditional Thai techniques.

The first permanent residence built in Dusit was Vimanmek Mansion, finished in 1901 and is said to be the world’s largest golden teak mansion. It is an absolutely stunning building and well worth a visit. It was originally partially constructed on the island of Ko Si Chang in 1868 as a royal retreat and was moved to Bangkok in 1901 under orders of the King. It has an elaborate architectural style reflecting western influence, combining Europe’s neoclassical style with traditional Thai architecture and early 20th Century modernism. The Royal Teak Mansion has 31 apartments and is three stories high with the exception of the octagonal end of the west wing whose fourth floor was used as the King’s private quarters. The mansion has many grand staircases and intricate lattice walls which are absolutely stunning.

Vimanmek Mansion was used for only a few years before it fell into disuse and was almost forgotten until 1982 when it was rediscovered by Queen Sirikit who found it to be lovely and structurally intact. The Queen asked permission from King Rama IX to renovate the mansion for use as a museum and it now to showcases Thai heritage from the period reign of King Rama V. The mansion turned museum provides an excellent opportunity to see the way the Thai Royals lived at the start of the 20th century and doesn’t disappoint as an amazing photo opportunity. Compulsory English-language tours of the building start every 30 minutes and last an hour.

The Abhisek Dusit Throne Hall was built in 1904 and was used to receive important foreign visitors and as a banquet hall. The building is a mix of Victorian Gingerbread architecture, Moorish style facades and a Thai twist. It has a very ornate exterior decorated with intricate carved flower motifs on its panels, gables and eaves. Infact every external vertical or oblique surface is decorated with fanciful hand-carved latticework and the overall effect is very pretty. The Abhisek Dusit Throne Hall also has ornate stained glass windows. The main throne hall is a key highlight of the building. It has a high ceiling with elaborate designs and the throne still stands imposingly at the far end. During the 1990’s the building was renovated and turned into a museum displaying works of traditional Thai art and handicrafts.

How to get there

Dusit Palace is located in the Dusit district a few kilometers north of the the Grand Palace. By far the easiest and most comfortable way to get to Dusit is by air conditioned metered taxi.

You can take the Chao Phraya Express Boat service to Thewet pier and from there it is a 20 minutes walk to the Dusit Palace or take a tuk tuk or taxi if you don’t want to walk.

From downtown, take the Skytrain to Saphan Taksin station and then take Express Boat Service. You can take any Express Boat but the yellow flag line is the fastest one. Or if you want to avoid the boat, the nearest SkyTrain station is Phaya Thai. Dusit Palace is about for about 2½kms from the station. Or from Monument Station take bus 515 that stops at Dusit Zoo.

If you’re coming from the direction of the Old City, bus 70 runs directly to the Dusit Palace. Get on it at Sanam Luang if you come from the Grand Palace, or Ratchadamnoen Klang Road if you are coming from Khao San Road.

If you have a Grand Palace ticket less than one week old, admission to the Dusit complex is free. Otherwise admission  is 100 Baht. Tickets are valid for all buildings except for the Ananta Samakhom Throne Hall and the Royal Elephant Museum which cost extra. Since Dusit Palace is a royal residence all visitors must dress modestly.

Thai classical and folk dancers perform everyday near the Teak Mansion at 10.30am and 2pm and is free for everyone.