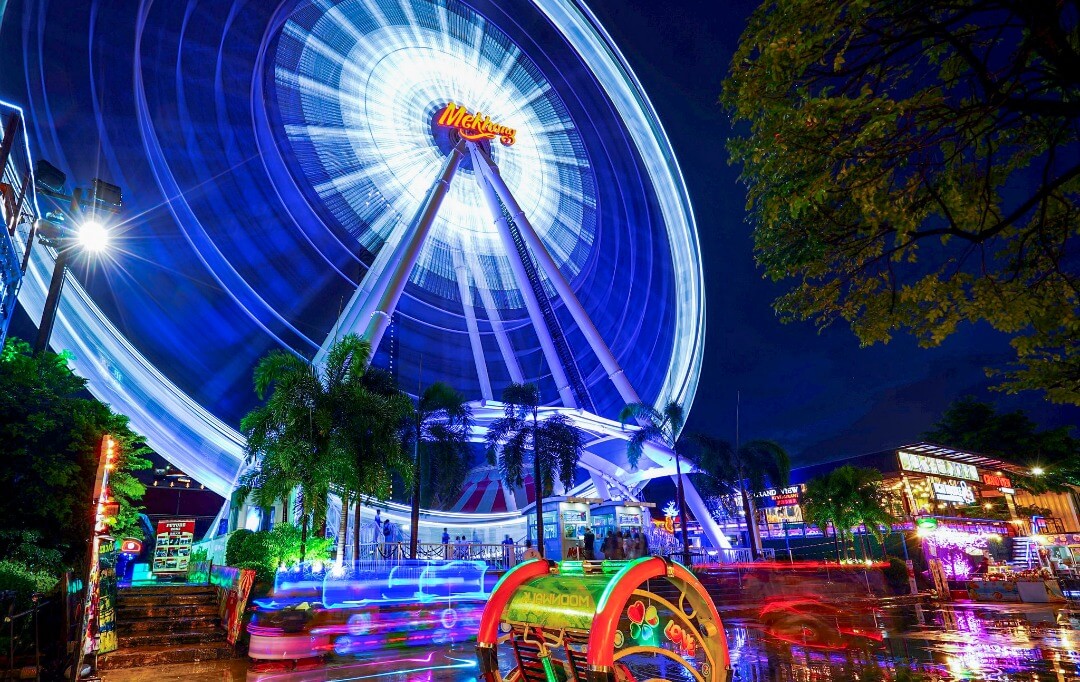 18 May Bangkok Shopping: Asiatique The Riverfront

Posted at 16:49h in Blog by thailandtravelbag 0 Comments
Share

Asiatique The Riverfront is a stunning open-air night time shopping and dining experience next to the river in Bangkok. The riverside complex opened in 2012 and features over 1,700 shops, 40 restaurants, a cabaret show, a puppet theatre, a Muay Thai show and a giant ferris wheel. It also has a 300 metre long boardwalk and a tram. The huge warehouse complex is very trendy and the cool Bangkok crowd come here a lot at the weekends. Here’s some key highlights Asiatique.

Asiatique The Riverfront is located in the old warehouses of the East Asiatic Company. Asiatique is themed on Bangkok’s past as a trading post during the end of the 19th and beginning of the 20th century. Teak wood was traded on this pier and many of the original buildings have been retained.

The name “Asiatique” honours the Danish “Asiatic” freight company, which helped construct the port at the end of the 19th Century.

Style-conscious locals and tourists alike love Asiatique. Most shops are locally owned small businesses, but a few big names are found here too, including an Apple Store.

Asiatique and the Mekhong Ferris Wheel in Bangkok

The renowned Calypso Cabaret has made its home here. A glittering extravaganza is performed featuring Thailand’s talented transgender performers in stunning costumes. Show tunes, Chinese love songs, Korean pop and Japanese Geisha dancing are part of the show. Kids giggle at the ladies dressed up as ostriches and the slapstick comedy, and grown ups marvel at the talent of these Thai performers.

“Muay Thai Live – The Legend Lives” is located here too. This show theatrically tells the story of Thailand’s famous fighting art of Muay Thai.  Imagine a montage of fight scenes from your favourite Hollywood movies. The engaging plot and athleticism of the actors is inspiring.

The Joe Louis Puppet Theatre is also located here and is a traditional puppet performance but with modern choreography. It will take your mind on a wonderful, mystic and sometimes funny journey of ancient Thai characters.

Joe Louis was born in 1922 to parents who were both Khon (masked drama) performers and puppeteers. Joe Loius himself performed from a young age in a Thai Folk Opera Troupe as comedian and a puppeteer. He started his own puppet troupe after Second World War, then in 1985, formed the now famous ‘Joe Louis Puppet Theatre’ with his children.

They perform adaptations of epic Thai literature, such as the Ramakien. The Joe Louis Puppet Show is now run by his nine children at Asiatique.

The Factory District is where the fashion shopping happens with over 500 small shop located in the old riverside warehouses. There are lots of cool fashion targeted at trendy Thais, designer items, handicrafts,  home furnishings and there is also an Apple Store.

The Waterfront District is what you see when you first arrive by boat. Upscale restaurants line up along a boardwalk, including Thai, Italian, Korean and Seafood. This area is full of photo opportunities including the giant Ferris wheel. Live concerts are also held here.

The Town Square District  is a mixture of Thai & Western influences. There’s some independent coffee shops and some famous international brand restaurants too.

The Chareonkrung District has more than 1,000 shops selling handicrafts, home decor, souvenirs and all sorts of other items from local vendors. The Joe Louis Puppet Theatre and the Calypso Show are located here too.

Take the BTS (skytrain) to Saphan Taksin station, then walk to the river. Then take a free ferry boat to Asiatique The Riverfront which takes about 15 minutes. Chao Phraya river affords some wonderful views on the way. The free boat starts at 4:30pm and the last boat leaves Asiatique back to Saphan Thaksin at 11:30 p.m. The free boat is the easiest way to reach Asiatique The Riverfront on quieter nights, however the queue for the free shuttle is often long, in which case a taxi can get you there from Saphan Taksin BTS for around 70 baht.