7 Thai Fruits You Should Try on Your Holiday - Thailand Travel Bag
138
post-template-default,single,single-post,postid-138,single-format-standard,bridge-core-2.5.9,qode-page-transition-enabled,ajax_fade,page_not_loaded,,qode_grid_1300,footer_responsive_adv,qode-theme-ver-28.7,qode-theme-bridge,wpb-js-composer js-comp-ver-6.8.0,vc_responsive

7 Thai Fruits You Should Try on Your Holiday 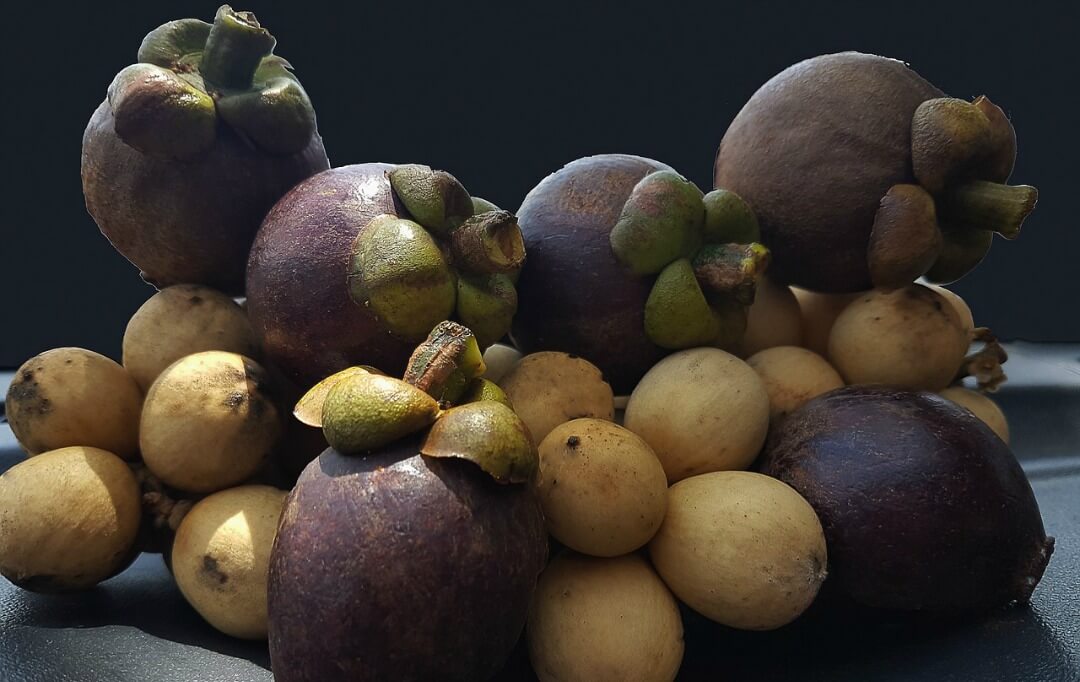 13 Jun 7 Thai Fruits You Should Try on Your Holiday

Posted at 00:29h in Blog by thailandtravelbag 0 Comments
Share

Every holiday should be an adventure especially when it comes to trying new foods. Thailand has delicious fruit that is incredibly cheap such as bananas, mangos, watermelon and papaya, but if you want to try something exotic, check out these 7 Thai fruits that are tasty, healthy and unseen in western shops.

Reputed to be the king of all fruits, this fruit is massive, sometimes weighing in at more than 10kg. It has a very strong smell which means most people store it outdoors (yes it really is that bad) but although the pungent smell sometimes turns many western people off, it tastes creamy and delicious. You either love Durian or hate it but Durian is one of the most popular fruits in Thailand so it’s worth trying. Durian is available as a paste and Durian derived snacks are popular. It is in season from May to July.

The Pomelo originated in South East Asia but has been grown all around the world for centuries. It is the largest citrus fruit around and sometimes weighs more than 2kg. Pomelo tastes like a sweet, mild grapefruit with little of the grapefruit’s bitterness and its rind is very thick. Pomelo is normally sold in peeled segments as it is difficult to peel yourself. It is delicious and Thais also attribute many healing properties to it. The season for Pomelo is August to October.

Shaped like a bell and about the same size as a pear, this fruit is crunchy, refreshing and not too sweet, kind of like a cross between the taste of a cucumber and a pear. The rose apple is very common in Thailand and not expensive to buy. From bright red to pink or sometimes green, Rose Apples are worth trying for yourself since they are hard to describe. The season for Rose Apple is May to July but they can be found all year long.

Even bigger than a Durian, it is not unusual to see a 30kg JackFruit. It is the largest fruit to grow on a tree. Jackfruit is made up of hundreds of flowers that are fused together and you eat the “fleshy petals” that surround the seed (which is the actual fruit.) It tastes better than it smells, mango/peachy/pearlike. The texture is a little stringy and quite soft when it is overripe. Personally I don’t like it too much.

Brought into Thailand by Chinese immigrants hundreds of years ago, Longan was first planted in Bangkok and then in the North. It is in the North that the fruit has flourished and become one of Thailand’s largest export fruits. The most famous species is the pink longan produced in Chiang Mai. Its flesh is pinkish and thick and sweet, larger than a grape but smaller than a plum. The longan or “dragon eyes” is so named because of the fruit’s resemblance to an eyeball when it is shelled. When you start to eat this fruit it is hard to stop because they are so delicious. Luckily a bunch is very cheap to buy.

Mangosteen is delicious and has a limited season so if you see them I suggest you snap them up. The flesh is incredibly sweet and juicy but don’t eat the seed inside each segment as it is bitter. You’ll need a knife to get in through the purple skin and then just segment it like an orange. The fragrant, fleshy fruit is both sweet and tangy.

In bright spikey red with a greenish tinge, the Rambutan is beautiful. You buy them by the kilo and they are a bit smaller than an apricot. A Rambutan’s taste is sweet, and juicy. Breaking open the skin reveals a firm whitish fruit containing a seed. You can use a knife or your teeth to get in as the spikes are not sharp in any way.